Screen Printing History – How old is this printing technique? 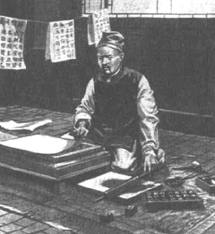 Silk screen printing may be the oldest and most practical printing technique dating back to ancient times. There are hypotheses that silk screen printing’s origins started in China at least the 12 century B.C. when silk began to be produced there. Silk printing may have originated not far from the Mediterranean Sea between Mesopotamia and Phoenicia according to available historical facts.

There are a number of archeological finds and historical studies that indicate that the Phoenicians found a way to reproduce patterns on fabrics using techniques uncommon to those used today.

However, they can be credited with pioneering a system of image duplication by using stamps to reproduce simple patterns. The method was later improved in Japan to a printmaking technique that created sharp-edged images using a stencil and a porous fabric, known as screen printing, or serigraphy. The Japanese used simple stencils which were glued onto a screen made of human hair that was stretched over a wooden frame.

This printing technique was then further improved throughout the Middle Ages and became widespread in Europe. The screen printing process that we know of today emerged in the early 1900s when a man from Manchester, England, Samuel Simon, received a patent for using a silk screen fabric as a printing screen. Another first in screen printing history. Simon patented this process of printing through a silk screen, which guaranteed a higher tensile strength and better size stability. Simon’s process also used rubber blades, or squeegees, to push the ink through the screen which is still used today. The invention was coined the term silk screen printing.

It was not until the First World War that screen printing took off in America. The process was used for printing flags and banners. The use of photographic stencils at this time made the process more versatile and encouraged wide-spread use. The actual use of silk for screens was discontinued in the mid-1940s during the Second World War because of its use in the war effort. Since then a polyester material has been used for the screen mesh and other improvements have been made in the presses, inks, and chemicals used. Otherwise the same basic screen printing process patented by Simon is still used today. 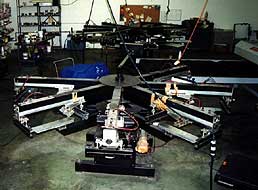 Spotlight Apparel continues the contribute to screen printing history by using state of the art automated equipment. This has kept us on the cutting edge of silk screen printing technology. Our current capabilities include high density printing of up to 8 colors. We emphasizes strict quality standards during all stages of screen print production. From design work from our in-house art department to screen prep, to job set-up, all the way through to final product inspection, control processes are in place to maintain high levels of quality in all areas.